In October 2006 Steve Crabb and I were asked to assist with Paul McKenna’s Face your Fear week on GMTV.  Paul was in the London studio curing snakes phobias, Steve was in Manchester working with people with a fear of heights and I was in Cardiff Castle to help cure 14 Spider Phobic’s. 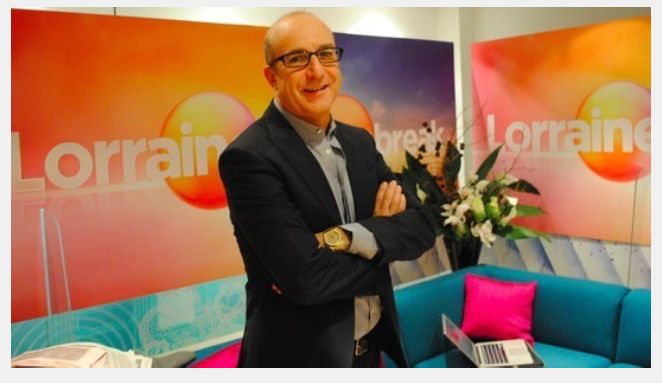 As with a lot of people that I work with they were looking for help to get rid of a fear yet doubted that it would work.

We were told that there would be a link with the London studio and that they would be filming us with the phobic’s they whole time, interestingly all the phobic’s were women on this program.  Statistically apparently 50% of women and 10% of men have a fear or apprehension of spiders.

Before we started to work with anyone GMTV wanted to film the women facing their fear.  Without any warning they brought in a huge tarantula and all the women screamed and ran; and they got their fear shot.

That left us with just under an hour to help 14 people overcome their phobia whilst live on TV.  We used a variety of techniques and a combination of NLP, TFT and Hypnosis.  By the time they were ready to film us again all the ladies lined up, without fear and the spider walked across all their hands.

Spiders are actually very delicate animals and their skeletons are on the outside of their bodies, dropping a spider can kill it so we always handle spiders very carefully. To protect the spider from harm when we say holding them we actually let the spider walk across the persons hand. 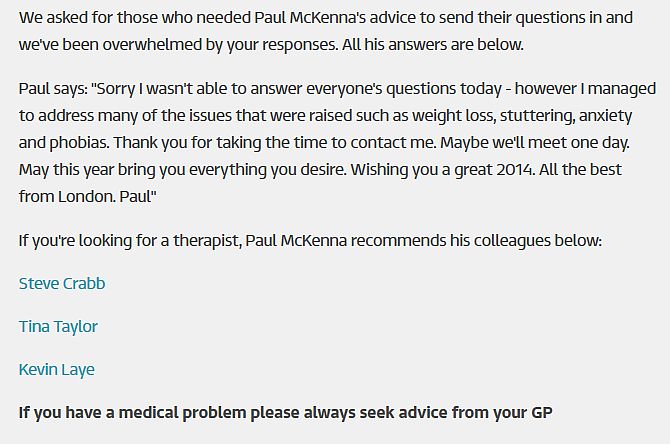 Anyone who saw this program would be able to tell you that be the end of the program all of the women had made huge changes.  And, as what usually happens when someone lets go of a fear, they all wanted to hold the spider with many actually wanting to have one as a pet.

Today I had a feeling of déjà vu as I got up at the crack of dawn to travel to Breakfast TV on the South Bank; where Paul McKenna and I met 3 women who had spider phobias.

They had already got their shot of the women being scared of spiders; the media do love that fear shot, and now Paul and I began to take them through a process to get rid of their fear.

We had 90 minutes to work with them so that they could be filmed on Lorraine’s show holding the spider.  Using a variety of techniques gradually the women became more and more confident at the thought of spiders, and the possibility of holding one.

Sooner than expected one of the women was ready and wanted to hold the spider, we looked for the camera man but he was nowhere to be found.  So when the first of the three held the spider for the first time, the shot was missed for the program.

It wasn’t long after this that the other two also held a spider for the very first time.

I spend a lot of time within my consultancy helping people overcome fears and phobias, they all have questions about the process including:

Does this really work?

And how long will it last?

These questions trigger memories of my training to be an NLP Practitioner.  One of the most powerful moments of that course was when I realized that my feelings were created by a combination of thoughts; and that I could change the way in which I thought of something which in turn changed the way I felt about it.

The Practitioner training includes learning how to let go of fears and anxieties.  The day we learnt about phobias was was known as Phobia Day.  This was the penultimate day of the course when the students were taught the NLP Fast Phobia Cure and how to help people let go of their fears.  I was ready, I had a phobia and I wanted to get rid of it.

I watched the demonstration on the stage by Paul McKenna & Michael Breen; amazed at how easy it all seemed.  So wanting to be able to stop being afraid.  I was scared of spiders.  I used to check rooms as I went in, I even looked in my bed at night to make sure they hadn’t crawled in between the sheets, I checked my shoes before I put them on.  I slept deep under the covers so “they” couldn’t walk on me at night.

How to let go of fear/anxiety

When Dr Richard Bandler was investigating ways in which to help people get rid of their fears/phobias he advertised for people who had already done this.  He spoke to hundreds of people and found out what they did.  They told him they got to a point when they had, had enough; they looked at their fear and realized just how ridiculous it was.  When working with my clients I first of all have them access a positive state, laughter is perfect for this.  When they have that state I’ll anchor it.

Anchoring is the term we use when referring to a learned association between an external stimulus and an internal response. We are constantly creating and using anchors. It is an unconscious behaviour, one that we can make use of  create anchors that are more useful to us.

In the late 1900s a Russian scientist called Pavlov conducted some experiments where he would offer food to his dogs and at the same time ring a bell.  After a while the dog associated the bell with food and within a short while he would only have to ring the bell and the dog would salivate.  He had created an association between a bell and feeding time.  There was no logical connection between the two things, but through constant repetition, a neurological connection was created in the mind of the dogs.

Whenever we do something new, we create a new neural pathway so we can re-access that experience again more easily.  Each time we repeat a particular behaviour, we strengthen the associated neural pathway, just as when you walk down a path through a field it eventually becomes a clearer path.

To create a positive humorous anchor.

1. Remember a joke or something that made you really laugh.  Fully return to it now – remember, see what you saw, hear what you heard and feel how good you felt.

2. As you go through this memory, remember that time and all the feelings associated with it, imagine making it brighter and more colourful, the feelings getting stronger, and any sounds become louder.

3. As you feel these good feelings, squeeze the thumb and middle finger of either hand together.

4. Now squeeze the thumb and finger together and relive that good feeling.

5. Repeat steps 1 – 4 several times with different positive memories until just squeezing your thumb and finger together brings back those good feelings.

Once I have the anchor set its time for the NLP Fast Phobia Cure. 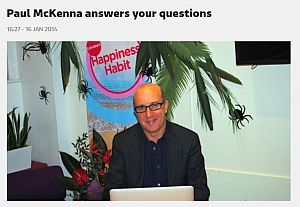 I ask my client to think about what has been scaring them, if they can remember the first time they became scared we use this incident or one of the incidents when they were really scared/anxious and ask them to evaluate the incident.  “On a scale of 1 to 10 where 10 is that you are very scared and 1 is that you are feeling calm where are you now as you think about that incident?”

Now put that incident to one side for a moment and close your eyes and imagine walking into a cinema/movie theatre in your mind and sit down in the front row.  In a moment you will watch a movie of that incident on the screen but before you do, float up out of your body into the projection room at the back of the theatre.  You are now looking down from the projection room watching yourself in the front row watching the screen.

On the screen the film begins, as you get to the beginning of the incident freeze the film so you have still colour picture.  Staying in the projection room watching you, watching the film; look at yourself on the screen whilst the film now runs all the way to the end.  To the point where you are OK, now freeze this last frame into a still picture and drain any colour out and make the picture black and white.

From your place in the projection room run the black and white film backwards 3 times.  Everything is going backwards at triple speed.  When you get to the beginning, freeze that picture and then jump to the still frame at the end of the film and run the whole thing backwards again.

When you have done this 3 times, stop at the last frame of the film where you are OK and float out of the projection room and into that last frame.  Re-associate fully into the still picture and one it backwards once more whilst firing off your positive anchor.

Now check how you feel on a scale of 1 to 10 and if necessary repeat.

Once the evaluation is at a comfortable level its time to future pace the next experience and think about a time in the future when you repeat a similar experience only this time you do so calmly and in perfect control.  Run through a few occasions in your mind whereby you are calm, confident and in control.

I’m not sure when I realized that I had stopped checking for spiders.  Over time I have thought less about my eight legged friends, and notice them even less.  One day my daughter came into my bedroom and said “mum theres a great big spider on the wall above your bed”.  “Oh yes so there is” I replied.  It was my husband who pointed out the different response, but of course I thought its only a spider after all.

That was many years ago, so I think I can safely say from my experience yes it does work and yes it does last.

contact Tina for details on how she can help you